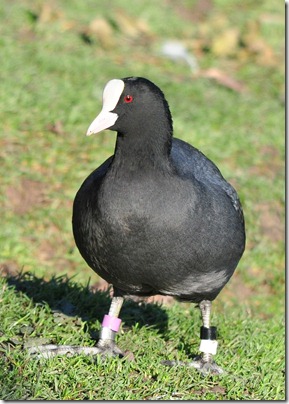 Steve had a batch of recoveries through from the BTO today, some nice ones which I’ll post over the weekend. One of these was of an interesting Coot movement.

The bird (GR05848) had been colour ringed at Redesmere Lake in Cheshire in January 2010 & had been sighted at the Lake up until March 2010. It then disappeared, until we started re-sighting it again at Redesmere from August onwards. We now know that GR05848 was 107km away from Redesmere – presumably breeding (?) at Great Pool in Westwood in Worcester!

A nice recovery but also a nice returning movement to the wintering site!

Today I met Peter Alker at Pennington Flash to catch & colour ring some Coot (9 new birds caught). I arrived 30 mins early to scan through the Black Headed Gulls for any rings. I saw four ringed birds & managed to read three of them (the other will hopefully be read over the weekend!). One Lithuanian ring, one BTO (EL75176) and a darvicd ringed bird – White 2D72, which I managed to take a dodgy photo of, with my phone through my bins! 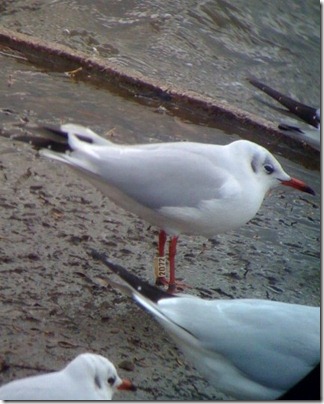