So much has happened during 2011 that it’s quite a hard to summarise it all in one complete blog post! Therefore we’ve created a video and included in it everything we think deserves a mention! We plan on creating one of these each year, so that in the future we can look back on what we managed to achieve! Something to show the Grandkids!!

To view the video, please click here it’s best viewed on a large screen, which can be selected at the bottom of the right hand screen.

We’ll post our annual ringing totals in the New Year.

Having a few days off work on the run up to Christmas, has allowed us to get out & about to do quite a bit of ringing. Time that was set aside to finish off Christmas shopping went out of the window, as we travelled around catching.

So in brief this is what we’ve been up to - 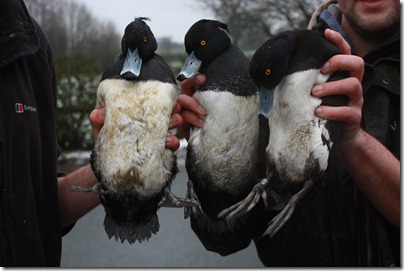 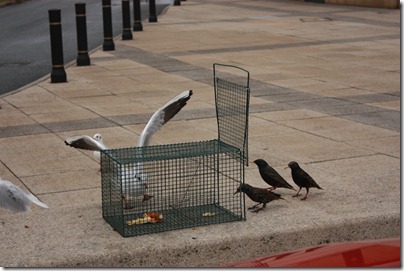 Whilst catching Black-headed Gulls at Southport McDonalds (!) we placed a potter trap out and managed to catch several Starling! 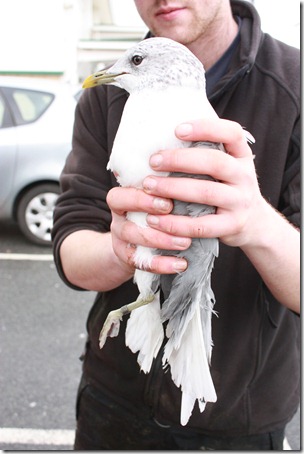 As well as hand catching a Common Gull. 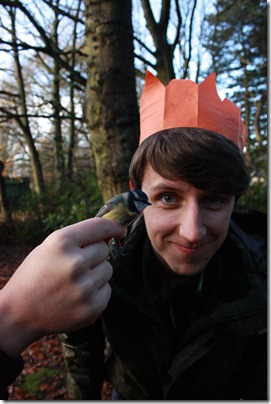 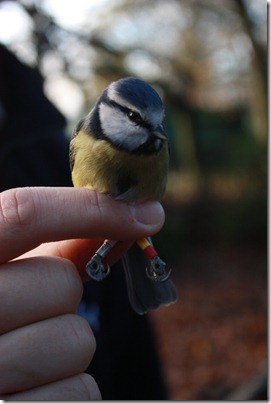 We were eager to get out to start catching Black-headed gulls for the darvic’ing project. With 23 new birds caught this week + 1 Swedish control. 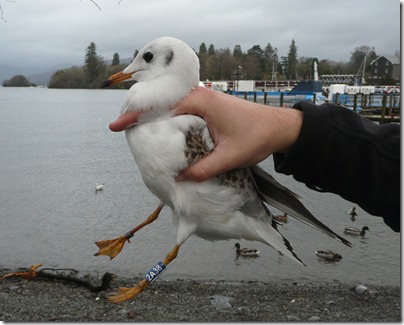 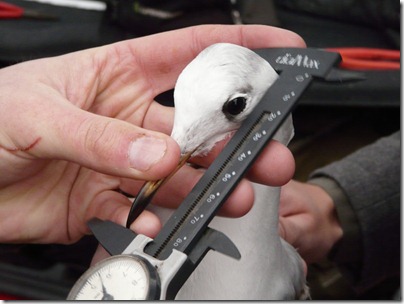 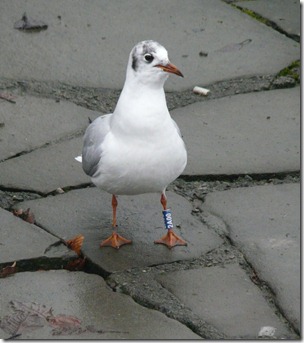 2A00 fresh in from Oslo! Seen at Bowness on Windermere on Christmas Eve!

Thanks to Gillian & Ciaran for the above photos….
Posted by Kane Brides at 7:57 pm No comments:

We’ve had a number of sightings sent to us over the last week, which involve our colour ringed Black-headed gulls. As previously reported 2A00 has come back to winter at Bowness on Windermere after summering in Norway. 2A05 summered in Lithuania and has be reported back at it’s ringing site at Preston Docks, yesterday by Jonathan Scragg. 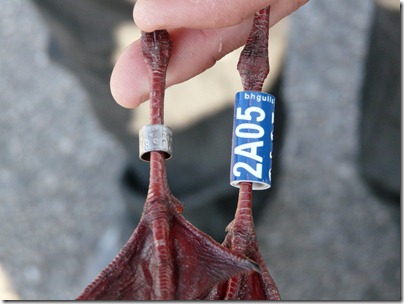 2A07, an adult bird which was captured at Killington Reservoir, Cumbria in June this year has been reported by Gavin Chambers at Loch Ryan in Stranraer, Dumfries & Galloway. This now being the second recovery of one our our Black-headed Gulls at Loch Ryan. The other being 2A64 which was ringed as a chick at Killington in June this year & sighted by Chris Baines in Dumfries & Galloway. 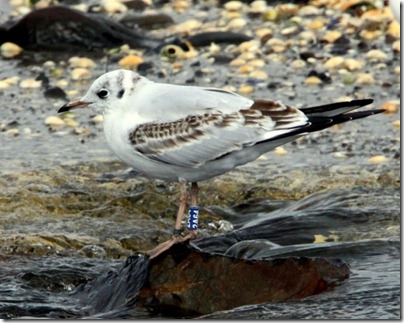 Finally, just as we were giving up hope on hearing back from more of our colour ringed chicks. Manuel Figueiras e-mailed myself & Ciaran to tell us he’d sighted 2A44 at Quilmas, A Coruña in Spain. This also being a chick that was ringed at Killington in June this year. 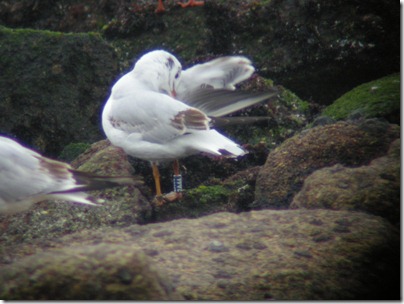 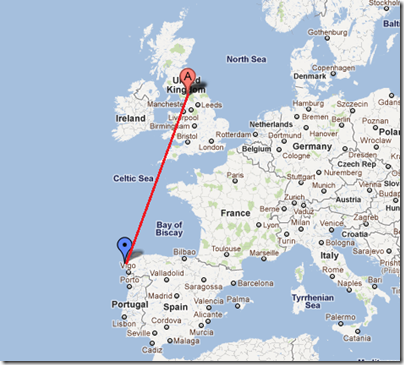 According to BTO Online, only 104 British ringed Black-headed gulls have been recovered in Spain. So our catching is starting to pay off! It’s great to be able to capture & mark continental birds, British breeders & British bred chicks.

Many thanks to Gavin, Chris, Ciaran & Manuel for the above photos and to everyone who has reported colour ringed birds…….

Posted by Kane Brides at 6:40 pm No comments:

Being off work for most of the week due to my wisdom teeth ‘erupting’ I was rather looking forward to getting out this weekend to do some ringing. After work on Thursday I left Martin Mere to give a presentation to students at Manchester University on bird ringing, before travelling to the airport to fly to Edinburgh. However most people will have heard or even witnessed the ‘code red’ weather warnings and I was told that my flight to Edinburgh had been cancelled! I was travelling to Scotland to, hopefully catch & colour ring more Coot as it had recently turned cold up there. 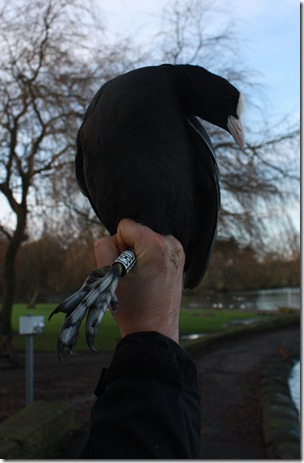 Several phone calls & discussions with Flybe staff saw that I could actually get into Scotland, and that I had to fly to Glasgow instead! I managed to persuade Gillian to drive to Glasgow to collect me & an hour later after the most horrendous flight ever, I arrived in Glasgow to be greeted by the Dinsmorag , who was waiting in arrivals with my supper – how kind is that!?

So Friday morning we got to work and managed to bag a rather nice catch of Coot & Black Headed Gull. Now there’s even more Scottish ringed Coot out there with their shiny new bling on! The Black Headed Gulls showed a great interest in our offerings and we managed to get 8 new birds & one control from Poland! 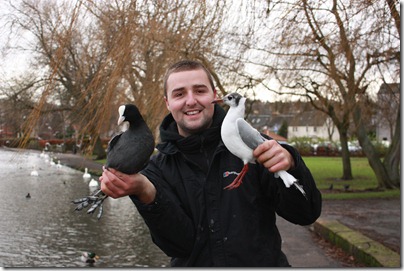 ‘At my happiest with a bird in the hand, even happier if I’ve got both of my favourite species in the hand!’ 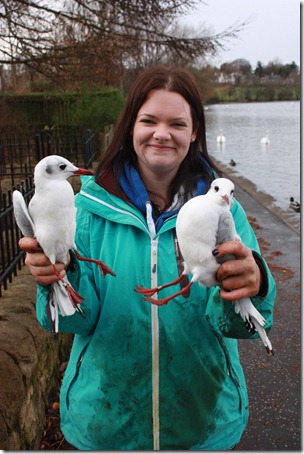 After finishing we left for McDonalds to use their bathroom to cleanup (!) and then we headed south, were after a rather long but enjoyable drive we arrived in Bangor ready for a cannon netting session on Saturday! Saturday went something like this – up at 5am, on Bangor Harbour beach by 05:30, nets set by 7am, 10am a catch of Redshank, a few Dunlin and 10 Bar Tailed Godwits was looking possible, 10:05 a Buzzard flew over the flock…… they spooked and didn’t return! However the team over at Beaumaris pulled off a rather nice catch of around 400 Dunlin & 6 Turnstone – which was good experience at extracting waders from cannon nets.

Gillian & I left the team processing the birds as we had to be back in Manchester by early evening, but not before calling into Bangor McDonalds to use their bathroom for cleaning up! They’re handy!

Today after waiting for the rain to pass, we decided to net the Shakerley feeding station for the first time this winter. A rather enjoyable afternoon had, catching around 60 birds – mostly new. This included a new species for Shakerley in the form of a Treecreeper! Four Willow Tit & several Bullfinch also made it onto today’s data sheets. 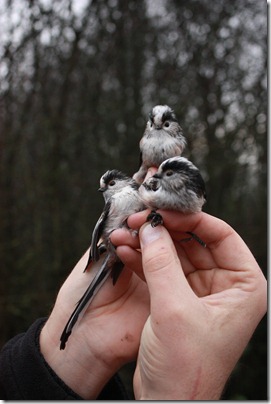 A large group of Long Tailed Tits decided to play ‘if ones in we’re all in!’ which kept us on our toes for a short while! 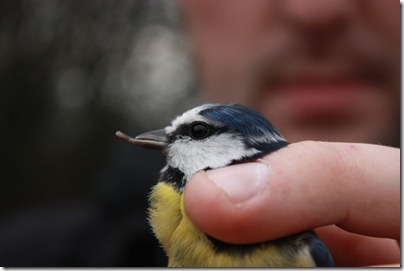 We also caught this Blue Tit with a rather long lower bill! It seemed to be coping rather well though!

Cheers to Gillian for a cracking weekend & for using her photos! Also thanks to Zac for allowing us to stay with him and to the SCAN team for Saturday………

Posted by Kane Brides at 6:58 pm No comments: