I've been out of action for one or two weeks - but was out with Steve this morning ringing in one of the Manchester parks. We've started catching and ringing broods of Mute Swans for the
North West Swan Study group.

6 Mute Swans caught along with 2 Coot and 1 Moorhen. 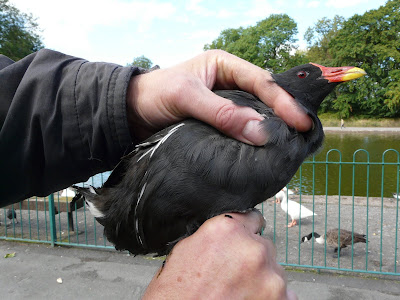 Posted by Kane Brides at 4:02 pm No comments: 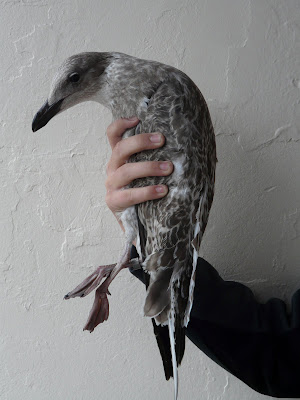 Posted by Kane Brides at 5:21 pm No comments:

Ahh... it's always nice to get back home and there's nothing better than netting in your garden after the mist net has been dormant for a few weeks.

a few hours of netting over the weekend produced the following - 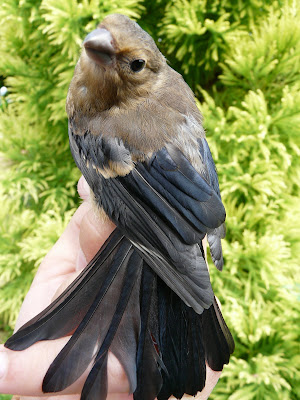 Some recent recoveries from the BTO -

Tawny Owl that I ringed in Atherton Woods in 2008 was found dead 20km away at Birch Services on the M62.

Siskin ringed in February in my Atherton garden was controlled two days later - 13kms away in Belmont.

Jay ringed in Dales Brow in Swinton (Grt Manchester) by my trainer Steve Christmas hit a window in my home town of Atherton a distance of 7kms.
Posted by Kane Brides at 9:12 pm No comments:

Well I'm now at the end of another amazing adventure! Iceland 2009 has been brilliant - I've met some good people, seen and handled some really nice birds and totally enjoyed every single minute of it.

Over the last few weeks we've handled an amazing 1263+ birds of 17 species. 1225 of those were new birds and 38 were recaps (excluding Whooper Swan as I don't know the exact total of new and recapped birds yet).

And now for the thank-yous.

But my trip would have not been possible if it was not for Ævar Petersen and Sverrir Thorstensen. I've learnt so much from these two and it's been great to have been working in the field with them both, so a BIG thank-you! 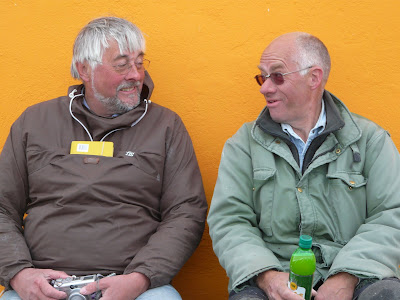 For many years the Wildfowl and Wetlands Trust have held annual ringing expeditions to Iceland in order to catch and ring breeding/moulting Whooper Swans. This is something that has been happening since around 1988.

Catching Whoopers in Iceland is very different from catching them back at WWT reserves in the winter. At our centres we use special designed swan pipes and entice the swans into the pipe with food, before a lever is pulled - trapping the birds.

However whilst the Whoopers undergo their annual moult in Iceland (making them unable to fly), this allows us to deploy zodiac boats onto ponds and lakes and armed with swan hooks we can catch breeding pairs + their cygnets and non breeding adults.

But it's not always that easy and at times we often find ourselves stripping off and getting into the water (which when it's a cold Icelandic day - can be quite an experience!!) The other method of catchment is when a pair with cygnets are out feeding on the marshes. In order to catch them, a team of us run across the marsh with swan hooks and after a little run around we often catch them all.
As part of an ongoing project, back in the UK WWT have been fitting satellite transmitters to swans to follow their migration routes to and from Iceland. A further 10 transmitters have been fitted to birds this year on their summering grounds and we´re hoping to be able to follow these back to the UK on Autumn migration. 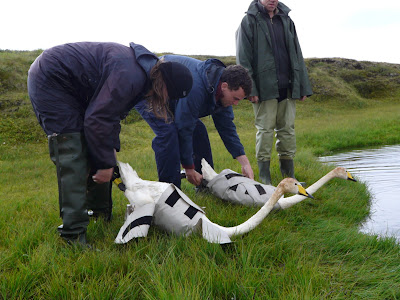 When moving between swan catching sites, our eyes are always scanning the road side - watching for any adult Golden Plover or Whimbrel on guard. If we see any adults beside the road, we pull over and watch for agitated behaviour. We then start looking for any young birds.

This was the case yesterday, when driving around Lake Myvatn we managed to locate two Golden Plover chicks.... 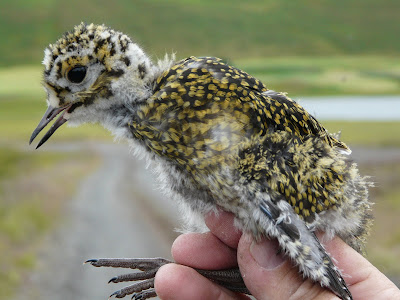 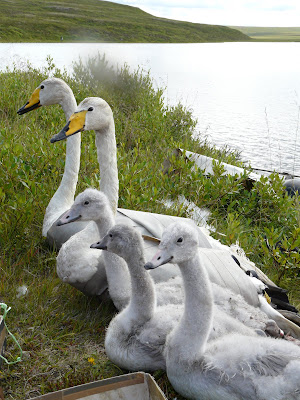 Posted by Kane Brides at 1:17 pm No comments: