The garden hasn’t seen a mist net for several months now & so after cutting back the vegetation and arranging a new feeding station, I was eager to give it a go! I decided as I was working from home on Monday morning, then I could work & keep an eye on the net at the same time. So 06:30 Monday morning saw Me in my PJs & wellies, putting a net up at the bottom of the garden – in a totally new position, never tried before! Although most of the birds caught, were tits – it was nice to get 16 Goldfinch & a House Sparrow! In the end I finished on 51 birds. 41 being newly ringed & 10 recaps. 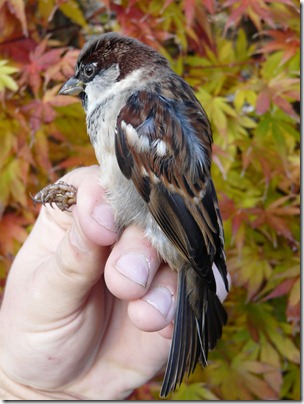 As I was home for the day, I was on school picking up duties & on returning back from collecting my Niece & Nephew – Kye was insisting that I opened the net again to catch him a bird! 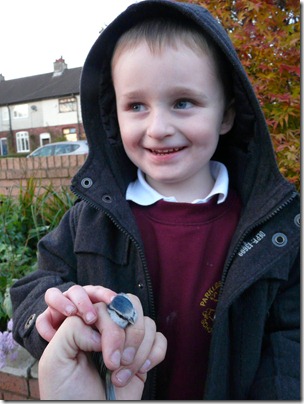 I’ve been up & down the country this week, so not really had much time to do more ringing. The only other outing we’ve had was on Tuesday morning at Southport Marine Lake – aiming to catch Mute Swan cygnets for the North West Swan Study Group. Along with Ciaran & Laura Dalton we managed to catch 20 cygnets, 1 Canada Goose, 1 Coot & 1 Moorhen.

Of the cygnets 19 were new & 1 controlled. A cygnet ringed 56km away from Southport in Septemeber 2010 at Hest Bank, Lancaster.