Finally after all the gadding about I've been doing over the winter - my work load has caught up, so I've been knuckling down to get some work done! So that's why the blog is a little quiet at the moment. I have been allowed out to play though (can't all be work!) and have done a bit of ringing this week - mainly at the Shakerley feeding station but also a few Coots caught too. 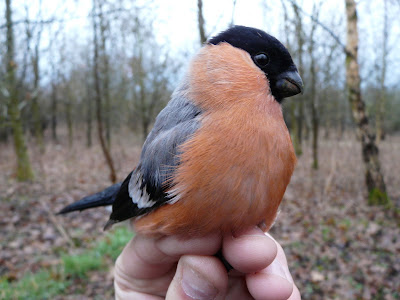 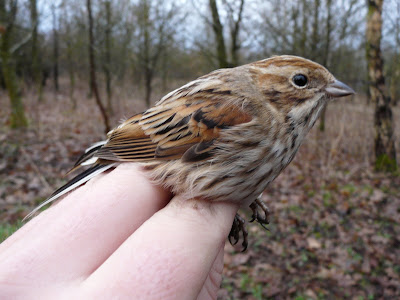 A batch of recoveries came through to Steve this week. The most interesting one is of a Mute Swan that was found dead under power lines in Dalton-in-furness. Sadly this bird met it's end at the grand age of 21 years old! Having first been caught and ringed at Fleetwood Marine Lake on 30/12/1988 as a cygnet male. The bird was darvic ringed - and therefore allowed people to report it's whereabouts to Steve and Wes.

Certainly one bird ringer has been busy reading darvic rings this week! Andy Jowett, whilst working in Ireland managed to read several darvics on Whooper Swans in a flock in Northen Ireland. Andy texted me the sightings, which were then added to the database and ringing information was then texted back to Andy, in the field! He also managed to read two Greylags that carried neck collars. One being ringed in Iceland and the other in the Highlands.

On the subject of colour rings - good numbers of sightings of colour ringed Coot have been received this week. Some interesting ones which I'll blog about in a later post.
Posted by Kane Brides at 9:49 pm No comments: 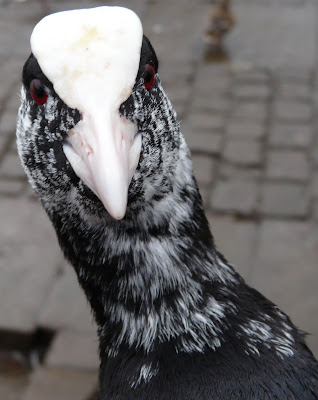 Keep your eyes peeled for this Coot and if you see it - check it for colour rings! 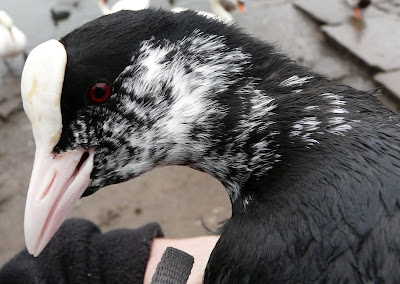 Not much ringing carried out this week - just the odd few finches, tits and Coots. Two controls this week, one from the Netherlands and one from Lithuania. Both on Black Headed Gulls in a Manchester park.
Posted by Kane Brides at 8:49 pm No comments: 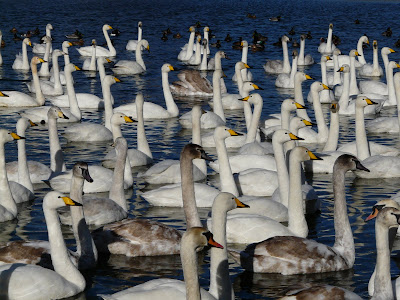 After a WWT swan catch you'll often hear the researchers & ring readers say ''now the work begins'' and as I write this I'm sat on a train on my way home from WWT Caerlaverock in Scotland. I was sent up there to help find out ''who is who'' - by this I mean to try and figure out which Whooper Swan is paired with the other and which family party that cygnet belongs to! Once fieldwork is complete the information then gets added to the ever increasing database. 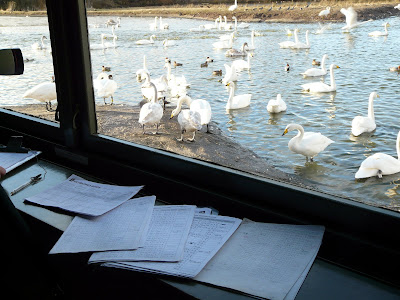 One of the utmost pleasures (and I do count myself very lucky) of helping to research a migratory species is being able to spend time in both it's wintering and summering country. Chasing after Whooper Swans in boats in Iceland and eagerly awaiting their return to the UK, to welcome back ''old friends'' is a spectacle that never ceases to amaze me. 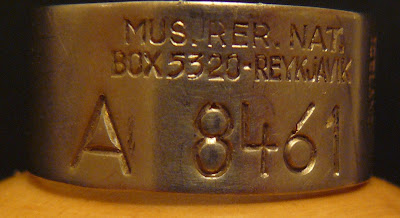 However the last time I saw Whooper Swan A8461 was when I was ringing it on lake Brennitjorn in Northen Iceland on 05.08.09. We caught it with it's mother + 2 siblings. Unfortunately due to a delayed nesting start (due to snow in May!) these cygnets were very small and therefore unable to hold darvic (plastic) rings. We did however, metal ring these birds and released them - which left us pondering as to whether they would actually make it to the UK that winter. 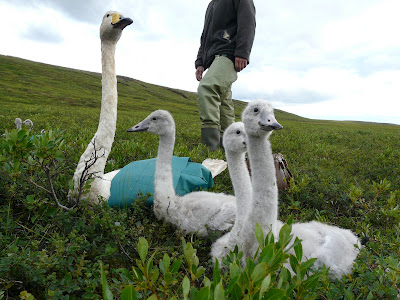 It seems they did. Sadly though, we recovered A8461 this week - found dead just a mile away from WWT Martin Mere underneath power line cables. Unfortunately power lines are an ever increasing threat to Whooper Swans. I pleased to report that United Utilities have acted quickly and placed deflectors on this stretch of line, which hopefully will decrease the number of hits. 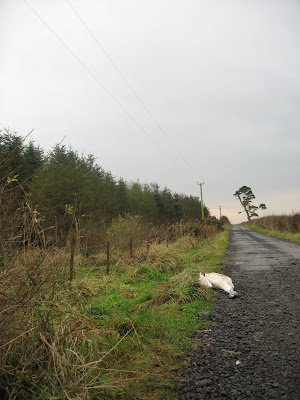 On a happier note whilst at Caerlaverock, Larry Griffin told me that Barnacle Goose - Yellow 3S - is back for its 23rd year. Having first been caught in Svalbard as a juv in 1986 this goose has been seen on the Solway Firth nearly every year since then. I find it quite amazing since that 3S is older than me and has travelled to and from the Solway over many years.

Posted by Kane Brides at 6:26 pm No comments:

A nice morning at WWT Martin Mere this morning a total of 338 birds caught - 268 new & 70 recaps (in brackets) and the sun was shining, making it even better! 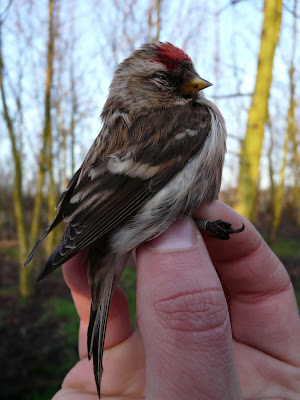 Two mist netting sessions at Shakerley this week, resulted in 150 birds being caught. Of these 103 were new, 46 recaps and 1 control. A Redpoll in the net was a nice surprise as was the ring on it's leg (X629161) later we caught another 3 (new) birds. 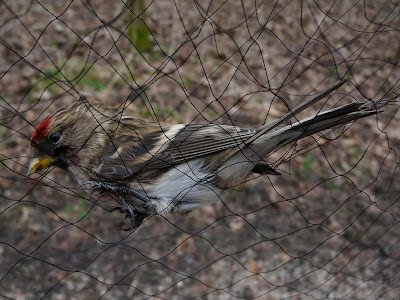 When catching at Shakerley, the tit species are the most common species to be caught. But this week it was a welcome break to catch a few more finches than normal. A Bullfinch & 4 Goldfinch that we caught, all carrying rings already - had been ringed in my garden 1km away during 2009. These are the first exchanges between the two ringing sites. 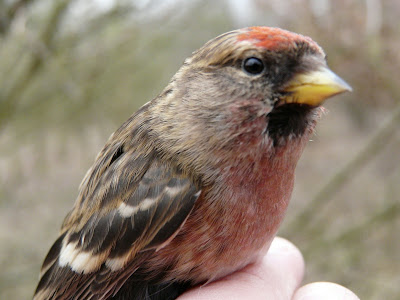 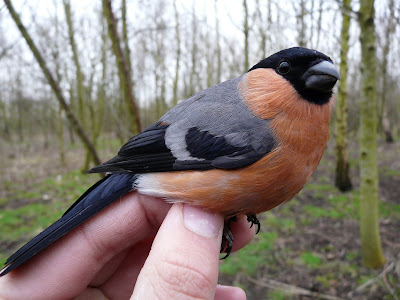 Posted by Kane Brides at 8:32 pm No comments:

Just back from spending the weekend in Ireland with Chris Bridge. Mostly a birding trip as Chris wanted to search for Forsters Tern and Ring-Billed Gull around Galway. You can read a report on Chris' blog which should be uploaded in the next few days.

So Friday morning found us in Galway City harbour and after seeing the above birds, we happened to bump into a nice chap called Michael Davis. Michael was taking photos of Black Headed Gull rings and as we helped him to read an Icelandic ring (575839) he invited us to have a look in a big ring bind folder that he had. This was full of A4 paper, each with the heading of a different country and listed beneath were the ringing information for all the gull rings he'd read. To name a few, he'd read rings from - Iceland, Norway, Finland, Sweden, Belgium as well as UK ringed birds.

He flicked through to the ''Iceland'' page and was able to tell us that 575839 was ringed on 26/06/2007 at Breidabolstadir and first seen in Galway on 15/10/2007. Amongst the ringing information on this page were familiar Icelandic names such as Sverrir Thortensen and Olafur Torfason!! 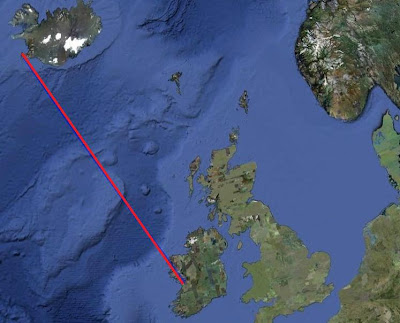 Before leaving Galway on Saturday we had another go at ring reading and managed to read EL59494 (UK). This bird was ringed on 14/6/2005 at Kingsbury Water Park,Warwickshire. 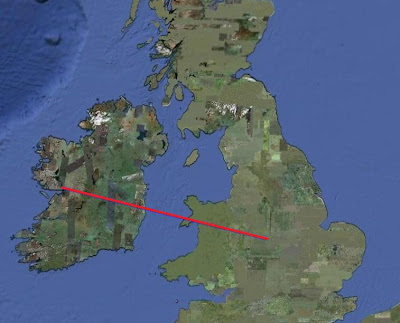 Next we were off to Dublin to join in, in the Trad Fest celebrations.......and the morning after, with sore heads we dragged ourselves to Phoniex Park and read a Black Headed Gull darvic ring - Yellow 228G. Thanks to Chris Benson for the ringing information on this bird, it was ringed as a pullus on 02/06/2009 at Lough Mask in County Mayo and ours was the first sighting since then. 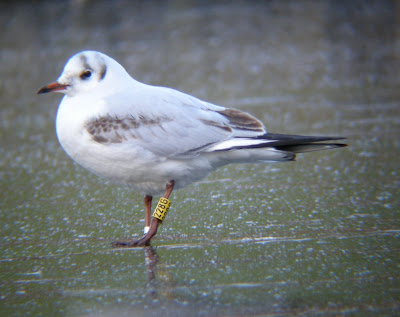 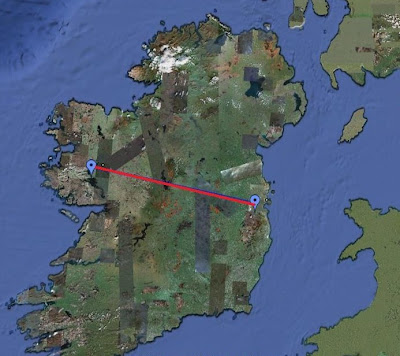