Thanks to Peter Bainbridge I finally received the news that I’d been waiting for, that ‘our boy’ 2A00 has returned back to Bowness-on-Windermere after spending the spring & summer in Oslo, Norway. Just 23 days after ringing, 2A00 was sighted by Morten Helberg in Norway and throughout the summer 2A00 has been seen and photographed at several places in Oslo. 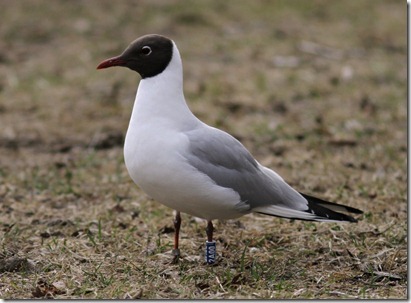 The Migration Atlas suggests that UK wintering Black-headed Gulls appear to be very site-faithful. Studies in London (Widgery 1970, Christmas 1986, Gosling 1988) have shown that birds use the same feeding & resting sites over several years, irrespective of the age of the bird or the countries from which they originated from.

With 2A00 being the first bird we darvic’d as part of this project, we’re very fond of him! Up to now we’ve only darvic ringed 6 adults and three of these have been seen since ringing. This goes to show how useful these rings are and any darvic rings on any species can be reported to www.ring.ac

Ciaran is home very soon, so I’m rather looking forward to getting out with him and starting to catch some more adult birds as part of this project.

Whilst I’m on about a gull species. Luka Jurinovic has asked me to post a link to the up and coming International Gull Meeting taking place in Croatia in February. For more details of this, please visit here.

Thanks to Carsten Lome for the above photo.