The feeding station at Shakerley is beginning to slow down & at some point over the next few weeks, I’ll end the feeding there. Last week I had two ‘lunch time’ sessions catching 15 new birds, 7 recap & 1 control. Two new Willow Tit were a nice surprise, as were a controlled Reed Bunting (L042429), making this the third controlled Reed Bunting at Shakerley during the last 3 weeks! Of the other controlled birds, one was ringed by the Fylde Ringing Group at Moss House Farm, Pilling, Lancs on 26/09/2010. 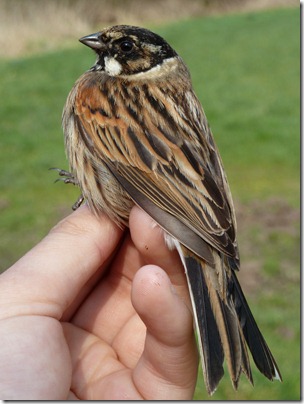 Last week I noticed a Goldfinch roost in my local cemetery of around 60-70 birds. The following evening the roost had dropped to around 40 birds and I got permission to net it on the Thursday evening. By then the roost had dropped further to around 25 birds & I managed a nice little catch of 12 new birds with surprisingly no recaptures. 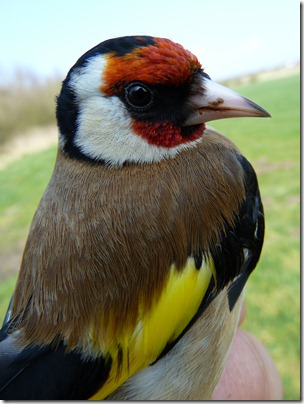 On Saturday Chris, Zac & myself had an early start as we travelled south for various reasons. Chris & Zac where going cannon netting gulls in Gloucester and I was attending a conference at Slimbridge. So it was late when we finally got back to Manchester & we were well and truly tired! On Sunday morning, still tired the three of us were sat in the conservatory when Zac noticed a small flock of birds landing in the tree at the back of the garden, I dismissed these as Starling and continued to mope around on the couch – but Zac was a little more intrigued and went for a closer look. These birds turning out to be Waxwing! Although we didn’t attempt to catch this small flock, it was rewarding to see that one bird was colour ringed! So we’ll post more details on this bird soon. 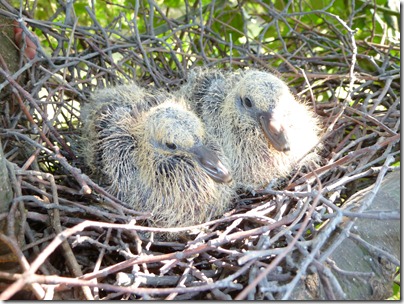