Checking the BBC Countryfile weather last Sunday evening, I wasn’t too hopeful for much ringing to be carried out this week. However in between showers and with one or two good days, I’ve actually had quite a good week with 74 birds handled.
Tuesday (05th) saw me checking my nest boxes in Atherton Woods for the Nest Record Scheme. Many boxes are once again occupied by Blue and Great tits with one box holding Nuthatch and several ‘‘Tawny Owl’’ boxes holding Stock Dove. I don’t mind Stock Doves taking use of my owl boxes, I think they are smashing birds and I’d rather have them in the box than it not being occupied at all.
I was aware that one of my owl boxes held a sitting female Stock Dove. Every time I went near the box – with ladders or just generally walking past, she would shoot out of box and into the woodland canopy. However this time round, I crept up to the box with the ladders and a landing net. Gently and quietly I placed the ladders on the tree (without trying to rattle them!) and quickly climbed up and placed the net over the hole. By this time I was expecting her to dart out, but no sign of her, by now I thought she was already out feeding. So next I placed my hand in side and could feel that she was sat on the eggs. I gently lifted her off her two eggs, ringed and placed back onto the nest – wonderful! 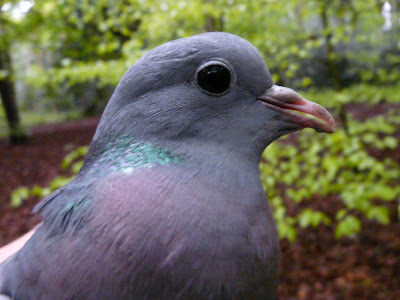 I was also aware that a Stock Dove was incubating eggs in my old Tawny Owl hole, so once again climbed that and found 2 warm eggs and 1 cold Tawny egg. As I was coming down the tree, a Tawny flew out of a higher hole – so off I went back up the tree and could instantly hear two young owls bill clapping. I reached down into the hole, collected the owlets, ringed and placed back – but not before the female tried attacking me!! Then I had my little celebratory moment (1000th bird – see earlier post) before carrying on with nest box checking. 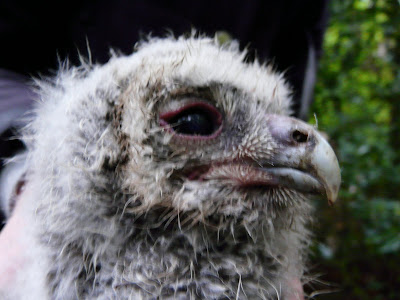 The day after, I had noticed that quite a number of the nearby houses had audible Starling young, which had just hatched. I started to bait the garden up with suet bars and mealworms – and before long the adults had found them.

With a few days off during the week I decided to have a few mist netting sessions in the garden, which yielded a total of 47 birds of 9 species – 38 new, 8 recaps and 1 control (i.e - ringed by another ringer elsewhere) 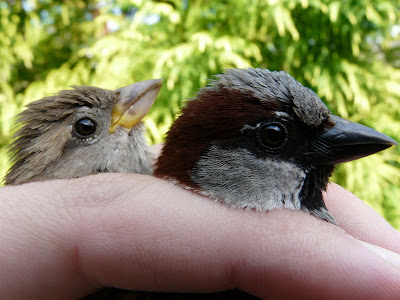 Other birds ringed during the week –

A brood of 5 Long Tailed Tits – (Their nest had been half predated!), a brood of 2 Wood pigeon and 1 Canada goose.

Total of all birds caught -